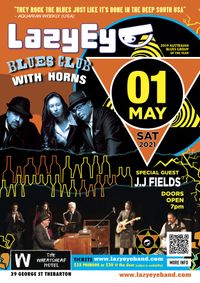 Think B.B. King sharing a scotch with Booker T at the crossroads after midnight.

With more awards than you can poke a mojo hand at, what started as a hair-brained idea between friends medicating their way through jazz school over a bottle of red, has taken them on an adventure that spans the globe. A multitude of gongs suggests Lazy Eye deliver some of the best original blues Australia has to offer.

“Powerfully fuelled by the soaring sound of Whetter’s B3, Graf’s fretwork is neatly crafted, pushing through the roaring organ sound when needed. Vocals are mostly shared between the members and show a clear grasp of the fundamentals of gritty, gripping delivery and soulful blues demands. This is a band that has quality and purpose at its core.” - Elmore Magazine (USA)-

“It’s a pleasure to see a weather-beaten Hammond fronting a band and even more so when it’s wielded with style. Such is the case with Adelaide blues outfit Lazy Eye” - The Australian

JJ Fields (Sav) has been active in the Australian blues music scene since 1989 in award winning bands such as The Streamliners and Blind Dog Taylor and The Heat. JJ has appeared on the same bill with artists like Junior Wells, Canned Heat, Eric Burdon, Little Charlie and the Nightcats and has shared stage with Big Jay McNeely, Carie Bell and many more.

His solo work reproduces authentic blues styles with an original touch and a refreshing approach. His work has also appeared on Boogie with Canned Heat documentary.